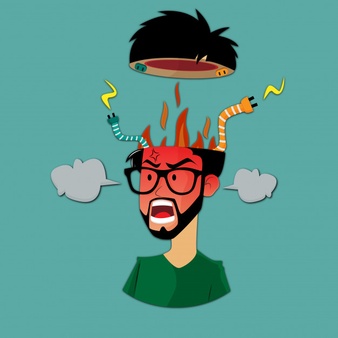 Here are a few Idioms related to the topic Anger & Irritation.

Don’t bite my head off just because you’re fed up!

He’s going to blow a fuse when he finds out he was betrayed.

* give a dirty look / a filthy look– to look a someone showing that you are very angry. (olhar com ressentimento / olhar de raiva)

Tony was being really annoying so his father gave him a dirty look and went to the kitchen.

This construction noise is driving me up the wall!

When my mom saw the mess in the kitchen she looked at me with a face like thunder.

They had a fight and flew off the handle.

* give someone hell – to speak at someone angrily because they have done something wrong. (repreender / dar sermão em alguém)

I got home very late and my dad gave me the hell.

* go through the roof / hit the roof – to become very angry and shout at someone.  (subir pelas paredes)

When I told my parents I had done a tattoo they went through the roof / hit the roof.

* have a chip on your shoulder – to feel very angry and resentful because they think they have been treated unfairly. (guardar rancor / guardar ressentimento)

She thinks he has a chip on his shoulder because he doesn’t talk to her anymore.

Mom will have a fit / throw a fit when she hears about this.

* lose it – to lose your mind / to lose control. (perder a cabeça / perder as estribeiras / enlouquecer / descontrolar-se)

I completely lost it when I saw he was cheating on me.

It makes my bood boil when people lie to me.

* a pain in the neck – something or someone very annoying. (um pé no saco)

My boss was a pain in the neck. I’m glad we don’t work in the same department anymore.

Don’t talk about her divorce, it’s definitely a sore point for her.

I hope you learned some new idioms today, see you next time!